FREE DELIVERY ON ALL ORDERS 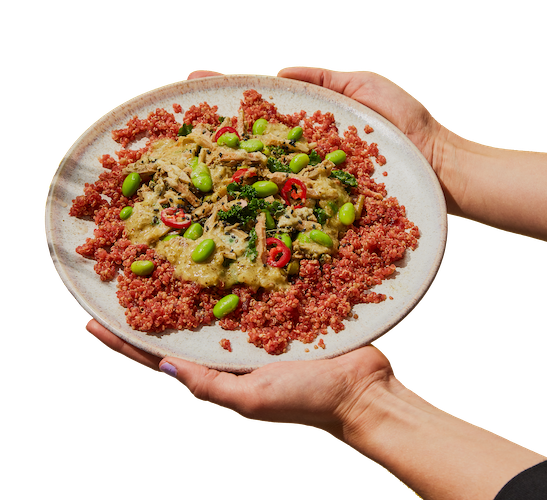 Curious about trying out a vegan diet, but not sure if you want to say goodbye to meat completely? Then you are not alone; over the last few years we have seen the rise of the flexitarian, with more and more people opening up to the ever-expanding and enticing range of plant-based foods and recipes on offer.

We surveyed 1,500 meat eaters and discovered that a third admit that they are ‘vegan-curious’. We also took a look at Google Trends search data to discover that more people than ever have been googling about vegan diets with searches peaking each January. In 2020 vegan related searches were three times higher than they were in 2017. This coincides with the Veganuary non-profit initiative which began in 2014 and now receives 100 times more search interest than it did when it began, indicating that people are becoming more and more vegan curious each year.

To help people on-the-fence, we decided that we show them that even die hard meat eaters can enjoy the benefits of a vegan diet, which is why we are now on the hunt for the UK’s biggest meat lover this Veganuary.

Are you adamant that you need meat in your life? Do you eat meat three meals a day, seven days a week? Can you not imagine a life without it? If this is you, then you could be in with a chance of earning a £50,000 pro rata salary by becoming our Vegan Curious Coordinator.

As our Vegan Curious Coordinator, it will be your role to trial and test vegan produce from a devoted carnivore’s perspective and share your honest thoughts on social media. For a three-month period, you will have to take on the challenge of not consuming any animal by-products. You will get an unlimited supply of our vegan ready meals to keep you going, and have our registered nutritionist on hand to help you plan meals, while a chef will also be available to help you adjust to your new meat-free diet.

The successful applicant will get paid a pro-rata salary of £50,000 for the three-month period.

There will also be a final test on completion of the three months. We will give our Vegan Curious Coordinator an ultimatum; if they decide that they have actually been enjoying their new diet and believe they can say goodbye to meat for the rest of 2021, we will offer them a lifetime supply of our meals (worth £100,000*), but only if they can prove this through continued social media posts and a food diary.

If you believe you are up to the challenge then fill in the below form:

“There was a time when being vegan was an all or nothing lifestyle choice; and vegan food options were considered lesser than their meat-based counterparts. As we head into the New Year, we at Vibrant Vegan want to demonstrate not only the health and environmental benefits of being vegan that we hear so much about, but also highlight that vegan food can, and should, be enjoyed by everyone. Even the UK’s biggest meat lover!

“We’re incredibly excited to hire our first Vegan Curious Coordinator and to watch them share their journey with people that love good food and are interested in a vegan lifestyle but perhaps feel it’s too much of a commitment or simply aren’t sure where to start. Everyone has their own reasons for choosing veganism; we want to show it doesn’t have to be all or nothing, and you don’t have to sacrifice good food for the cause.”

*Estimation based on a 35 year old enjoying one meal a day (value £6) until they are 80 years old.